The Sheer Power of Tweeting About…”Poopin” 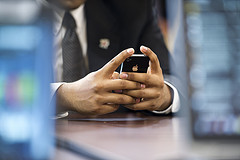 Let’s face it. Discretion is pretty much out the window with online communication today. But I think it says something about shareable content and how well people are listening to others these days.

To be clear, I’m not coming down on anyone in this article. I’m simply using what seems like a strange topic to make a very valid point and help you understand how influential you can be.

I recently came across a tweet on Twitter that had been retweeted. (Say that 5 times fast.) This is nothing new.

I’ve seen this particular tweet plenty of times before and thought it strange but, okay, whatever. That’s for them.

Yepp…weird?…maybe, I dunno. But then I saw something new.

I saw it had actually been retweeted…6 times!

What is the world coming to when we have people's "poopin'" tweets getting retweeted? #justwondering

And then something strange happened. It dawned on me just how powerful social media (Twitter in this case) really is.

Here is a guy that is ‘allegedly’ doing something everyone does. He took it upon himself to share with the rest of us…and then it got shared by several others that were following him. So what does this tell us about shareable content and our influence on those that follow us?

It tell us a lot actually. Here’s 3 things I thought of.

So what does this mean?

It means that you better be careful what you put out there for one thing. But it also means that we now have the ability to get ANYTHING shared with not only our network, but potentially with everyone’s network who is following us.

This is huge. This is our society as we know it.

Do you have anything else you’d like to add to my list of things that this proves? Any situations you can think of that are similar in nature? Share in the comments area below.